This feature is the paragon of Martian archaeology. Two objects come to mind first when considering artificial structures on the red planet,
and one of them is its neighbor. While the Face can be seen as a silent sentinel gazing out from this magnificent region of ruins, The D&M is
irrevocably what this sentinel bears witness to and stands guard over. More than a kilometer tall, the pyramid towers above the surrounding
plains of Cydonia. It is the keystone, the true ark, a thing built to survive the cataclysmic eons and bear testimony to we who came later of the
sheer majesty, power, technology, knowledge and history of the ancients. It is the absolute bearer of fact that Mars once had a civilization, as
well it bears the tragic record of the apocalyptic destruction of a highly advanced civilization that may have once inhabited our solar system;
a dark & mysterious record more incredible than is allowed by what we think we know about this whole other world, even about ourselves.

This history we are now beginning to piece together. For the longest time we simply did not have adequate imagery to dive down in and explore
with any magnitude. With that in mind, back in 2007 I requested HiRise images of it. Year after year passed by and while I was returned many
other great images with extremely curious features such as the "Candor Tetrahedron" which I'd requested as well, and of course coverage of
nearly every other major feature in Cydonia; somehow and for no good reason this one never showed up. Over time I put in several more...

And they are good. One is highest resolution, the other a little lower, but nonetheless a fantastic stereo pair taken from different angles.

click images to see larger versions from the HiRise site

Over the years many people have written many things and done much study on this thing as pertains to its shape, location, what it points to,
the geometry contained, even the sigillic significance or lack of all above. I defer all that to simply say let's take a look at what's down there.
To do this I'll make use of an image map because this thing is huge and we know it takes a lot of big pictures to see a giant scheme of things.

So no one gets lost, here are the links to the individual pages these numbers lead to

When we re-settle Mars we're going to excavate it. This is after all our heritage, our destiny, our history.
We can start by digging in NOW! The only thing hiding the archaeological magnificence in these images is the dirt
and detritus of the ages and cognitive dissonance. The D&M does not care, it will be there regardless, waiting.

I've uploaded the full resolution versions of these images to Gigapan. Now you can see them like I do,
Explore! Jump on, dive down, scroll around, zoom in and rediscover your heritage thoroughly.
Many have given much to make sure you have that opportunity.

My HiWishes- 'Another Popular Landform in Cydonia Mensae' 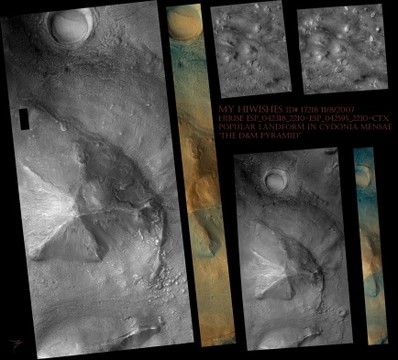 Consider; this ancient pyramid and its surroundings being once subjected to a major catastrophic event, as if large bodies of water coming
in from the NNE had at some time swept violently through the area, scouring and burying, gathering debris in corners, wiping everything.

This is especially evident along the eastern and northern sides and most the way up the D&M itself on those sides. The eastern and
northeastern sections appear to have accumulated a debris field which didn't come from the D&M, but was emplaced there. The damage
displayed makes more sense in this light, as well the better preservation of finer surface features and corners on the South and West sides.
After surviving a solar system wide catastrophe as well as eons of sandblasting wind and Martian style erosion, it is by no means pristine.
When viewing this area you need to put on your aerial archaeologists hat more than any other and peer past the ages to what it once was.

Thanks to the wonderful art of Andrew Currie, that's not such a difficult thing to do at all, he caught it right at the edge of the Cataclysm.

the first image below left looks like an 'after' to Andrew's 'before' above.

In the Wake of Primordials #1 The D&M Pyramid